Skip to content
HomeStuffSo I bought the HTC Vive 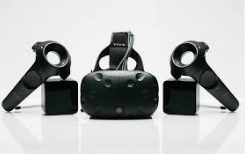 Long story short, the HTC Vive came first to my shop so I bought it since I can’t wait to get my hands on some good VR.
This article is some sort of summary of my vive use experience.

The DK2 had low res, but it was impressive.
It showed me and others what is VR about and what to expect when the resolution will be upgraded.
The consumer version of Rift has the same resolution as the Vive, the different part is the head/controller tracking system utilized by the manufacturers.

Oculus is relying on infra red camera watching a constelation of infra red leds on headset and the touch controllers.
This needs more CPU processing power if you want to keep fast refresh rates, but today’s CPU’s can handle it without a sweat.

Oculus offers only seated/standing experiences, however you can walk around the room if using the Vive due to use of the different tracking system. That gives the Vive upper hand. And quite frankly I don’t even want the Rift anymore, though I will test it once I have it.
The ability to walk around the room adds so much more to the experience that limiting my self to only seated experiences is out of the question.

(UPDATE 12.sep.2016)
I had tested the Oculus CV1 at my home, the ergonomics of the headset if far more superrior, it is easy to put on and off the head.
The integrated headphones are very good, loud and sound is ritch.
But there are several downsides.
The hole for the nose is large, and significant amount of light is shining thru, it is not very bad but that is absolutely absent in Vive.
Oculus has almost no “god rays” they are very minimal.
I had lost tracking 5 times out of 10 when I was looking backwards, that’s not acceptable if you are use to vive’s perfect head tracking.
All said, Vive is the winner. The experience of the VR without hands is something comparable to Google Cartboard.

Most of the motion sickness is caused by disconnect between the movement of your head and the aproximation of the head position within the virtual world, and lower refresh rates can cause discomfort and even nausea.
Oclusion will cause drift or wrong calculation of the position and with 1 Rift camera vs 2 Vive’s lighthouses the Vive seems better.
However, the Vive headset has no sensors on the back, that means that if you are looking only to 1 lighthouse the position is calculated probably with the same accuracy as with use of camera based system.

When I reflect on the use of the DK2, I was never sick, but I feel discomfort after 30 min. or so. Some of my friends were sick in 1-5 minutes and they refused to try it again.

After I had tested the Vive on those exact individuals, they had no issues whatsoever, playing up to 1hour.
I had no issues after 4 hours of use, however after 6 hours I felt a little bit disoriented for about 10 minutes.

My impressions of the Vive are:

1) roomscale is mega cool and a must
2) hand controllers are preffered, gamepad gaming .. not so great
3) cable is long enough and does not tangle much
4) the absence of integrated headphones is troublesome if using any other than in ear buds.
5) the lenses are not so great, and stuff that’s in focus is only in small area in the middle
6) resolution is not there yet, 8k and more is needed for the future
7) resolution is not the key 😀 , games do not need more resolution, though movies look terible
8) setup takes some time, but it’s there to stay so no worry
9) breakout box is an excelent idea and very practical, I strongly suggest to buy some even for oculus users.
10) they give you 2 chargers for the hand controllers and all cables you can ever need, good job HTC / Valve
11) the face foam thing is the worst, it’s a sweat sponge, however they give you 2
12) IPD and eye releaf adjustments are easy and accurate
13) not all games are good, and not all games are games but only experiences
14) multiplayer games are the most fun !

Once my Oculus Rift will come I will share the details of my experience with it, but it is very hard to imagine it will be any better.